RESOLUTION BY THE INTER-PARLIAMENTARY UNION (IPU) ON THE CASE OF SAM RAINSY
On 20 April 2011, in Panama City, the Governing Council of theInter-Parliamentary Union (IPU) was submitted a Resolution by theCommittee on the Human Rights of Parliamentarians, in which there isthe following sentence:
“[The Governing Council of the Inter-Parliamentary Union] considersthat it is becoming even more urgent to review Mr. Sam Rainsy’s caseand to rehabilitate him, and calls on the authorities, includingParliament, to take action to this end without delay so as to enableMr. Sam Rainsy to resume his rightful place as a member of theNational Assembly and to stand as a candidate in the nextparliamentary elections.”
The full text of the Resolution is available in the attached file.
SRP Members of Parliament 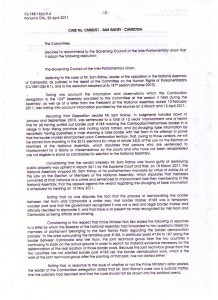 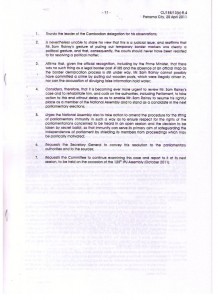