(English) From California to Cambodia, Fighting for Women

IT was at Berkeley in the 1970s that Mu Sochua, a shy teenager fleeing a war in Cambodia, learned the thrill of speaking her mind. 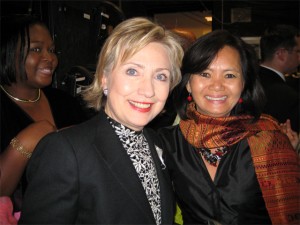 The daughter of a well-to-do merchant in Phnom Penh, she had been sent to the West at the age of 18 to study and to be safe from the fighting that later brought the brutal Khmer Rouge regime to power.

“When I hit San Francisco I knew that was my city,” said Ms. Mu Sochua, who is now 55. “I began to shine. I let my hair grow. I looked like a hippie.” She learned English, she said, by listening to the Beatles.

She earned a master’s degree in social work from Berkeley and transformed herself enthusiastically from a demure traditional Cambodian woman to one who knew her rights and was not shy about demanding them.

That is her problem today as the most prominent female member of Parliament, a leader of the country’s struggling political opposition and a campaigner for women’s rights in a society where women are still expected to walk and speak with a becoming deference.

“I have to be careful not to push things too far,” she said in a recent interview on the campaign trail here in southern Cambodia. “I have to be very, very careful about what I bring from the West, to promote women’s rights within the context of a society that is led by men,” she said.

She has this in mind as she campaigns through the villages of Kandal Province, a woman with power but a woman nonetheless. “I walk into a cafe and I have to think twice, how to be polite to the men,” she said. “I have to ask if I can enter. This is their turf.”

Ms. Mu Sochua is a member of a new generation of female leaders who are working their way into the political systems of countries across Asia and elsewhere, from local councils to national assemblies and cabinet positions.

A former minister of women’s affairs, she did as much as anybody to put women’s issues on the agenda of a nation emerging in the 1990s from decades of war and mass killings.

But she lost her public platform in 2004 when she broke with the government and joined the opposition Sam Rainsy Party, and she is finding it as difficult now to promote her ideas as to gain attention as a candidate.

LIKE dissidents and opposition figures in many countries, she has found herself with a new burden, battling for her own rights. As she has risen in prominence, her political stands have become more of a political liability than her gender.

Most recently, she has been caught in a bizarre tit-for-tat exchange of defamation suits with the country’s domineering prime minister, Hun Sen, in which, to nobody’s surprise, she was the loser.

It started last April here in Kampot Province when Mr. Hun Sen referred to her with the phrase “cheung klang,” or “strong legs,” an insulting term for a woman in Cambodia.

She sued him for defamation; he stripped her of her parliamentary immunity and sued her back. Her suit was dismissed in the politically docile courts. On Aug. 4 she was convicted of defaming the prime minister and fined about $4,000, which she has refused to pay.

“Now I live with the uncertainty about whether I’m going to go to jail,” she said. “I’m not going to pay the fine. Paying the fine is saying to all Cambodian women, ‘What are you worth? A man can call you anything he wants and there is nothing you can do.’ ”

Ms. Mu Sochua was still in California when the Khmer Rouge seized power in Cambodia in 1975 and began mass killings that would take 1.7 million lives over the next four years.

She headed for the Thai border, where refugees were fleeing by the tens of thousands, and it was there that she met her future husband, an American, when both were working in the refugee camps. They have lived together in Cambodia since 1989, where he works for the United Nations, and have three grown children living in the United States and Britain.