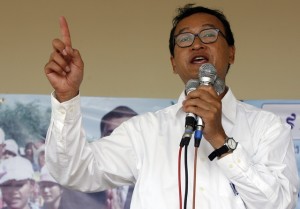 (New York) - The latest conviction of the Cambodian opposition leader Sam Rainsy on politicized charges makes it clear that the government of Prime Minister Hun Sen is no longer interested in even the pretense of democracy, Human Rights Watch said today. Rainsy was sentenced to 10 years in prison on September 23, 2010, on charges of spreading disinformation and falsifying maps.

Human Rights Watch urged President Barack Obama to tell Hun Sen when they meet today that this incident will threaten international assistance and relations with Cambodia, especially if the government fails to take urgent action to reverse measures that undermine freedom of expression, assembly, and association. Obama is scheduled to meet with Association of Southeast Asian Nations (ASEAN) leaders in New York on the fringes of the annual United Nations General Assembly meeting.

“President Obama and other world leaders need to let Hun Sen and his government know that the free ride is over,” said Sophie Richardson, acting Asia director at Human Rights Watch. “Cambodia cannot sentence the leader of the opposition to 10 years in prison for peaceful expression without expecting serious consequences.”

The court sentenced Rainsy, leader of the opposition since 1995, for disseminating a map that purports to show that Cambodia’s border with Vietnam had been moved. The trial was closed to the public, though the verdict was read out by Judge Ke Sakhan, who said, ”The acts committed by the offender seriously affected the honor of the government.” Rainsy, who has been in self-imposed exile abroad all of this year, faces prison if he returns to Cambodia.

The case is part of a concerted and longstanding campaign against Rainsy. On January 27, the Svay Rieng provincial court convicted Rainsy and two villagers, Meas Srey and Prom Chea, on charges of inciting racial discrimination and destroying demarcation posts on Cambodia’s border with Vietnam. That conviction was based on an incident in October 2009, when Rainsy helped villagers in Svay Rieng remove border markers that they contended had been moved onto Cambodian territory.

“The sentencing of Rainsy takes Hun Sen’s campaign of persecution of critics to a new extreme and highlights government control over the judiciary,” Richardson said. “Somehow the Cambodian authorities routinely find the time to use the police and courts to attack critics, but never are able to arrest or convict those who attack, often murderously, those very same critics.”

Human Rights Watch urged the United States, the European Union, Japan, and other key donors to take strong diplomatic action in response to the sentence against Rainsy, including recalling their ambassadors to demonstrate their outrage. Donors contribute approximately 50 percent of the Cambodian government’s budget.

From the time he created his political party in 1995, Rainsy has been subject to assassination attempts, threats, intimidation, criminal cases, and civil court cases. On March 30, 1997, a grenade attack on a political rally he was addressing killed at least 16 people and wounded 150. Rainsy’s life was saved when the full force of the blast hit one of his bodyguards.

The US Federal Bureau of Investigation, which became involved because an American citizen was harmed in the attack, found that Hun Sen’s bodyguard unit was implicated, but the Cambodian government has failed to investigate or prosecute those responsible.

Senior government officials have repeatedly brought politically motivated cases against Rainsy in recent years. His immunity as a member of parliament was lifted in February 2009 after Hun Sen filed a criminal defamation complaint against him for accusing Hun Sen of corruption. Rainsy’s immunity was restored after his party paid a US$2,500 fine. On November 19, 2009, his immunity was lifted again for the border markers case.

Another attempt to jail Rainsy came in December 2005 when he was sentenced to 18 months in prison on transparently political defamation charges. Rainsy was out of the country at the time. Under international pressure, Hun Sen agreed to a royal pardon in February 2006.

“For too long donors have ignored the alarming downward spiral of rights and democracy in Cambodia,” Richardson said. “If they continue not to react, they will wake up some day and find that Cambodia closely resembles Burma. It is time for diplomats to stand up and be counted.”

This September 24, 2010 news release incorrectly noted that the Rainsy Party was launched in 1998, whereas it was actually launched in 1995. The launch date of the Party has been corrected accordingly.