THE KHMER PEOPLE, LIKE THE THAI PEOPLE, WANT A REGIME CHANGE

THE KHMER PEOPLE, LIKE THE THAI PEOPLE, WANT A REGIME CHANGE 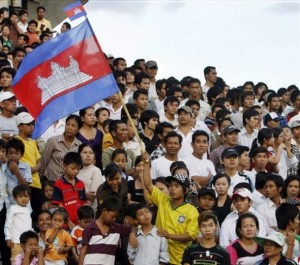 The Sam Rainsy Party congratulates the Puea Thai Party on their landslide election victory and sends its best wishes to Thailand’s first government led by a female Prime Minister.

The opposition’s victory in Thailand, a country geographically and culturally close to Cambodia, constitutes a strong encouragement for the opposition forces in this country.

It is obvious that
-       The Thai people, like the Khmer people, reject the status quo and want to see a regime change.
-       The Thai people and the Khmer people loathe the conservative and heavy establishment in their respective countries (*).
-       The Khmer people and the Thai people want social justice. They want to see a reduction in the gap between the rich and the poor and between the cities and the countryside. They call for the implementation of effective pro-poor policies.
-       If the next elections scheduled for 2012 and 2013 in Cambodia were as transparent and as honest as those held on 3 July 2011 in Thailand, the opposition in this country would also win a landslide victory.
-       For any opposition leader who consistently defends the poor but has been forced into exile and prevented from taking part in election campaigns in his country, physical presence is not as important as virtual presence in securing victory for his party, with the use of modern information and communication technologies.

(*) The establishment in Thailand has been described in many reports and press articles. In Cambodia it is represented by the Samdechs and the Oknhas, the omnipotent and arrogant CPP government officials and army generals, the CPP-affiliated heartless tycoons and other unscrupulous businessmen, the land grabbers and destructive loggers, the corrupt judiciary, and those brainless members of the royal family who have nothing to sell to the CPP but their royal names.