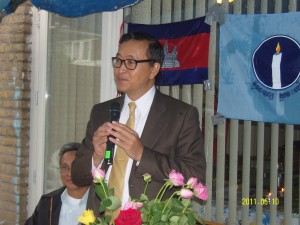 A SRP delegation composed of elected Members of Parliament Sam Rainsy, Yim Sovann, Son Chhay, Kuoy Bunroeun and Tioulong Saumura, is currently in Manila, The Philippines, to attend the 57th Congress of
Liberal International (LI) from 16 to 20 June 2011.
http://www.liberal-international.org/

On 18 June, opposition leader Sam Rainsy was received at the Malacanang presidential palace by President Benigno Simeon Aquino III for a face to face meeting on the sidelines of a reception in honor of the LI delegates from all over the world.

MPs Sam Rainsy, Son Chhay and Tioulong Saumura took the floor several times during the Congress to speak about the Congress theme “Human Rights and Trade,” but also about the Arab spring, People Power and other topics related to freedom, democracy and development.

In the presidential speech and closing remarks, LI President and Member of the European Parliament Hans van Baalen mentioned the case of Cambodia by saying, “As President of Liberal International, I ask
that the international community observes its obligation that derives from the 1991 Paris Peace Agreement on Cambodia of which they are the signatories, in particular in ensuring the safe return to his country
of Opposition Leader Sam Rainsy before the 2012 election and the effective implementation of reforms to the election system as recommended by the UN, the European Union and civil society groups.”